Another Bundle of Updates!

Registration is done. Laptop is set (HP ProBook 4310s as decided earlier). So what’s left is bidding for my modules and prepping myself to put in 10hrs on school work per day. Not going to be fun but I like the idea that this is entire course of study is driven by motivation. I think in the end, the things that last the longest and becomes most prevalent are things driven by self will. Not something forced down your throat or whipped into you. Gonna be camping in the library a bit and putting all those research skills into good use. Fingers crossed, this is the final lap, I’d better sprint. 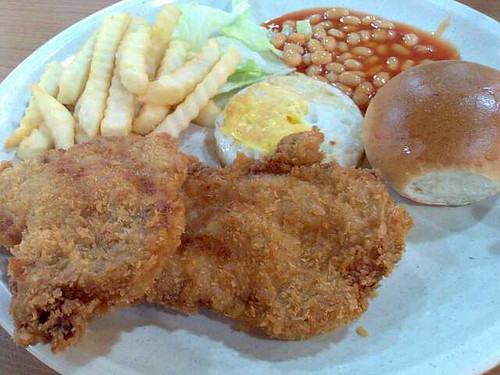 I think every guy has been trained in the army to NOT talk about army secrets to others, even your spouse. So same here for work. I’m down to the final days and am trying to wrap up my work. Doesn’t feel good to leave things undone and handed over to someone else (to clean your shit) cause that’s exactly what happened to me in Army (tks ah Alex, & Rockey ><). Financially wise, I’m in a pretty safe position as my expenditure isn’t high at all. I’m probably a boring person that doesn’t buy new clothes, etc but well it keeps my pockets secure! =P Oh yes, I’m a sucker for food but thank goodness uni food is REALLY cheap. $1.50 for a FULL Western Meal.. Woohoo! Who knows if I would continue working when I’m studying. Still getting freelance offers from individuals and companies and if required I might continue at my job on an ad-hoc or project basis. Just see how things goes. My priority is to get my uni life flowing smoothly.

Most Arsenal fans didn’t feel much when Adebayor left. I’ve covered that before so I ain’t beating on an old horse again. But Toure is a world of difference. This is the chap that put his body on the line for the club. He’s loyal but well, performance wise he dipped quite a bit after Sol Campbell left for Portsmouth. Wasn’t an ideal partner for Gallas. Frankly, I thought Thomas V. was brought in to replace Gallas since the later is 33 years old and would be hanging his boots up in a season or two, or five if he changes his last name to Bergkamp. It looks like its Gallas + Thomas V / Djourou with Djourou taking over Gallas when he leaves. I hope Wenger brings in replacements in defence. We’re pretty well built on the final third, but where is that DM? Maybe he’s putting faith with Song / Denilson and the command that Thomas V. brings might be the final jigsaw. Then we need our attackers to learn to track back and defend. I think some Arsenal fans have forgotten that Henry, as graceful a striker he was, tracked back almost all the time to help in defence. We need to see players like Walcott, Arshavin, RVP, Nasri, etc do that more often. No use waiting upfield for the ball when your opponent is tossing it behind you. Well goodbye King Kolo. Even if we don’t miss you for your performances (tbh you’ve dipped a lot), we’ll miss your dedication and loyalty to the team. All the best at teh Citeh.

I think I’m guilty of needing things around me under control. I was a single child in the family so I had my toys, my room, my anything neatly tidied and categorized in a manner coherent to me. Some people think I have OCD thanks to that. When planning big events or running various organizations, I have things planned to the final detail, tagged into various sets of categories (read: categories of categories) and have everything rehearsed x times with y trial runs. I’ve realized multiple times that it is very unhealthy because you cannot do that to another human being. If your safety comes from having everything calmly under wraps, you’re going to be a sad man in this volatile world. I’ve to learn to balance everything with good organization while embracing the need for surprises or even shocks. It’s hard to maintain a balance, I’ve to get that ingrained in me within the next 3 years or the years after would be worse. C’est la vive~

The Need to Upgrade

It’s like an addiction. Geek addiction. There’s always something you want to improve, something you want to add, something… damn it. I was pretty excited about my switch over to Win 7 running on a Raid 0 setup. It runs really sweet but a few weeks later I’m thinking, what’s next. Frankly, there’s nothing else to upgrade besides another 6GB of DDR3 RAM (taking the total to 12GB), a DX11 card (which is not even out in production yet and would cost an obscene bomb on launch) and a 24 inch monitor (so I can give my mom my 22″ and my mom can give my dad her 19″). The 24″ is gonna need a 1GB GFX so everything is bottlenecked there. It’s a bit sad huh? Guys tweak cars at this age. I’m tweaking PCs. Oh well, at least I’m saving the dough! One day, I’ll have a room with slide out wall sized screens, a speaking voice controlled AI assistant.. Alright enough geeky indulgence.