First up this is a purely uninformed post. Usually I go in depth to hunt down my sources and making sure what I say is accurate. But today, I’m dead out and I have one of those urges to mash a little news and tinfoil economics together. Tinfoil here obviously points to a tinfoil hat edition of which simply means – day dreaming.

The big news of say a few weeks ago is of course Kony 2012. If you have not heard about it, just hit up the official video on youtube. Basically, its a pretty strong movement to arrest a rebel leader in Uganda whose major crime is not rebelling against the government but abducting children and causing all sorts of atrocities against them to use them as part of his army. Now any time it involves young innocent children it becomes a grave matter. So Kony 2012 looks at forcing the hand of the U.S. government to do their world police part.

Now, do not take and trust anything at face value. As much as the Ugandan government is not your kind democratic leadership, we have no idea if the organizers of Kony 2012 have any other undisclosed motives to remove Kony. I’ll leave that to the critics. What I am day dreaming about is a mix of economic opportunity, development and aid.

Africa – The Next Frontier

Let’s go down the list. We do not have many developing countries left. At least not many in the next 50 years. Yes that is a long period, but it will pay to start early in this case. China is the world’s manufacturer. Enjoy that cheap labor cost for the next 20 years or so, I am pretty sure that this Asian giant will want to move into more profitable areas such as the tertiary industry by that point. Sure, they are so huge that there will definitely be regions still underdeveloped and stuck with low margin manufacturing. But face it, that means supply goes down while you can be sure consumption will rise. This is a massive shortage problem in the making. Who are the subs? Well there’s the less developed parts of South America, East Asia and East Europe. But by the 30 year mark, they would have started to move on as well. Most of them in the first place do not make ideal manufacturing zones. So what do we have left? Hello Africa.

Now the remaining part of this day dream is going to sound like an exploitative move. Because it IS one. No one does things for free and an economist spends day and night formulating plans and policies that a majority would agree to not because these people are nice and dandy but because there’s a little in this pot for everyone. Win-Win-Win-Win situation. It’s all about getting the incentives in order.

Here we go – Create an economic development zone in Uganda. Before this proceeds, be reminded that the author has barely any idea how adverse Uganda might be to development. But who cares, this is a tinfoil hat blog post. Anything is possible. There’s no real incentive to get into Africa at the moment. Most inbound moves are in the name of charity. Looking at the foreign aid contributions of the major powers, Africa is far from getting any attention it requires to make the leap forward. What’s there to like? Tough terrain, political upheaval, etc. No world power in its right mind would go heads in at the moment. But, if the Kony 2012 gains solid traction, this could very well change.

The last war that the Americans supported was joining WWII after the Pearl Harbor massacre. After that, the U.S. government have had a tough time explaining and gaining backing for any wars it fought. Think Vietnam all the way to Iraq and Afghanistan. Uganda is the first place after the 1940s where people have thrown their backing for the U.S. government to get dirty in Uganda. Bush would have loved it. Just saying. So, there’s no worry that your citizens do not back sending their men into the unknown depths of this African country. One down.

Going in to get Kony out is at most an act of questionable heroism. Who knows what greater terrors Kony is keeping down. Case in point, U.S.’ forceful removal of Saddam gave Iran a jolly good free time. Saddam being the madman that he tends to be was giving Iran a fair amount of crap to deal with keeping their hands full and not having sufficient time to grow those nukes. You get the point. So besides winning the approval of its own citizens and probably gaining support from the international community, what else is there for the U.S.? Economic opportunity. The rise of the 2 sleeping Asian giants have challenged the U.S. on both production and services fronts, and they are finding it tough to find endogenous solutions – so why not invest for the long term future? Two down.

It will not be tough to create an economic zone in Uganda after outing rebel leader Kony and winning the hearts of both the Ugandan government and its citizens. Creating such a zone means education, training, job creation, employment, social mobility, etc etc. If a world power comes knocking on your door, ridding your local opponent and offering to build up a section of our country in exchange for land and labor – will you say no? Nope, I believe this package is too good for Uganda to refuse. Three down.

Ugandan citizens, would they reject this move? You’ve got to be kidding me. Four down.

Of course, there are tons of things that can go wrong. A leadership tenure in the U.S. lasts no more than 12 years. You’re looking at a 30 year plan here so what are the odds that any administration would want to delve into this? Also, Uganda is landlocked making an export industry difficult (yes I know where they are on the map unlike millions of Kony 2012 activists). I’m not sure about terrain but that could be an issue. Climate and inherent attributes such as diseases and the like will make settling down a tough thing for those who are laying the foundations for that zone. So does that tear the tin foil hat into pieces? Not quite.

A succesful approach in an economic zone within Uganda would give confidence for private investors to back the U.S. government up in extending such projects to more viable African countries. Having a good model example will also make other more viable African countries more open to U.S. involvement in their economy. In the (very) long run, what the U.S. is getting is a major major major future production hub. You cannot fathom the importance of this when China and the rest stop producing your everyday goods on the cheap. This would swing the balance of power in a major fashion if all the tinfoil theories line up.

I think this might work. I think it represents a chance of sinking some meaningful time and money into an African country, not just throwing the billions at them aimlessly as foreign aid. Much of which land up in corruption or are executed poorly. It won’t be hard to get international NGOs to back the U.S. financially in this move. It’s a master plan rather than some haphazard short term move. So who knows. This tinfoil hat may not be completely made of tinfoil after all!

In case you are wondering what a tin foil hat is… 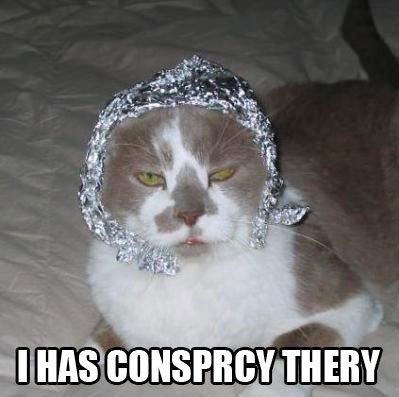