Arsenal brought home a point at the Eithad Stadium in a 1-1 draw against Manchester City. In a game billed to be the first real test for the Gunners – results were mixed. Some would feel we should have won outright, others will feel relieved due to the way the game played out. 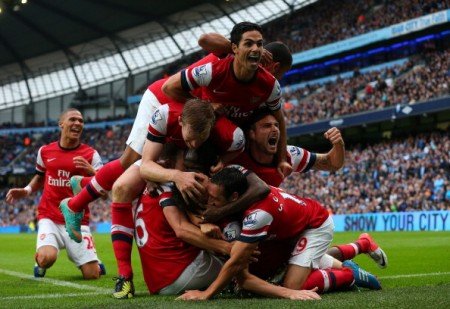 Joy and relief in a match that could have been so different.

Arsenal was prepared to sit back most of the game. We started the game with basically no real striker which leaves us with 6 in midfield. Of course, the idea was to have players like Gervinho and Podolski spring forward. The plan was to soak and strike – a system I personally advocate.

But plans like these require precision in finishing at the other end. We had none of that.

But plans like these require precision in finishing at the other end. We had none of that. In fact, Arsenal had everything to make that slick counter attacking work. City fans had their hearts in their mouth as the Gunners sliced them open three to four times in the first half just to scuff the end product.

The first half played out the way we wanted it to. We allowed City to come right to our penalty box, this is unlike other games where we attempt to close down teams in the midfield. The plan worked well for a good amount of time. Of course, with the quality of City’s players you don’t really want to see them at the edge of your box. They have many sharp finishers.

And that was the difference. Arsenal had many more chances. Better pass accuracy, better possession but we were wasteful in front of goal. Gervinho had chances to put us 2-0 up before that corner – it went to waste. Cazorla’s long shots were either off target or soft. Podolski also skewed one wide after a cutback in the box.

I was telling a fellow Arsenal fan – if we don’t put these away, we will get punished. We did.

I won’t read too much into it. It was a zonal system and it would have worked well if the players covering the area that Lescott ran into did their jobs. A couple of players were at fault for that including Kos, Mannone and Gibbs. A zonal system is a shared responsibility. Whichever works better will be decided by AW, Bould and Banfield but I will expect that tidied out.

Of course, one must not take away the fact that Lescott took his one chance really well – something that no Arsenal player could for all the right things they did in the first half. That headed goal flew into the top corner. A goal like this is a bit of luck but still it was a solid conversion. We would have headed to the break the better team if not for that. All that good defensive work in the first 40 minutes wasted by an execution error.

Things went from bad to worse. Arsenal was having trouble making any dent on the home side. City smartly sat deep in and countered really well. Yaya was immense. Diaby had good touches but had little going for him when he tried to go forward. Understandably, Diaby was taken off. Arsenal were shaken and needed change but AW made his changes 3 minutes later than his usual 66th minute subs.

Poldi was well marshalled and Diaby was suffering against Yaya.

On came Giroud and Walcott for Diaby and Podolski. As much as the later 2 had great games for us previously, they didn’t take off today. Poldi was well marshalled and Diaby was suffering against Yaya. I have no idea what form the team took after that substitution but things livened up. From what it looked like, Walcott took a deep lying striker’s role while Carzola took over Diaby’s. Giroud took his target man spot. Gervinho went to Poldi’s area.

The momentum that built in Arsenal’s favour yielded a corner. Lescott had a poor clearance and Kosc stabbed home. Kosc has a knack of scoring important goals. He scored the first in a near comeback against Milan (2nd leg), he netted the winning goal that gave us CL football in the final game against West Brom and now he kept us unbeaten. Credit where its due. He stabbed that ball into the net with so much venom, Hart had no chance.

Kosc did what Gerv fluffed a hat trick of.

Things then went completely scrappy. City had the best chance with Kosc gifting Aguero an open shot but the usually precise Argentinean slid wide. Gervinho had an amazing chance at the end but sent the ball into orbit. It wasn’t the first time his shots went to grateful City faithful.

Jenkinson and Mertesacker stood head and shoulders above the rest. Per was faultless today and fully deserved Sky’s Man of the Match award. 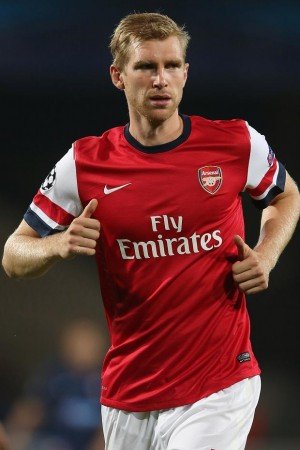 The BFG had one of his best games in an Arsenal shirt.

Carl was tidy and offered a strong attacking option on the right flank. He skinned City’s defenders thrice. I didn’t expect Jenkinson to be able to do that. This was the first time our right flank showed more promise than the left. It is a good thing to have options, else we turn one dimensional.

This was the first time our right flank showed more promise than the left.

Arteta had a difficult game. He usually doesn’t pass sideways or backwards but resorted to doing plenty of that. Same with Diaby, City’s Silva and Yaya were their best performers and that explains why our defensive duo were pegged back. We didn’t have to face them in the 1-0 win at the Emirates last season and it was good to pass a test with them playing this time. I thought Silva had a perfect game. Yaya as well, besides his pretty terrible long shots.

Cazorla’s long shots were mostly either too soft or wide. Yes, he scored against Liverpool that way but it was down to Reina’s error. I was about to write off his long shots when he took a stinging shot (finally one with power!) which was turned behind for the corner that yielded our equalizer. In a way, Cazorla did what Arsenal usually didn’t – just shoot. Shooting from far may not yield you goals but it does bring corners and mistakes and that was how City took the lead. Also, that’s how we equalized.

Shooting from far may not yield you goals but it does bring corners and mistakes and that was how City took the lead. Also, that’s how we equalized.

I think Giroud is a solid forward but I am continually worried that we are not playing to his strengths. Giroud is slow, he has to move into space early or use his strength to push himself past opponents and create openings but we are too used to passing into space rather than placing the ball at our striker’s feet. Giroud will lose a race to a ball because speed is his weakness. OG12 is pretty good in the air as well – but look at our crosses. Heck, we had a cross that missed the entire penalty box with 3 players waiting in it (first half).

That is the worry, our style of play doesn’t suit him. Giroud is no Chamakh, the guy plays well with his back against goal. His touches have been excellent with him setting Poldi up in one flick against Montpellier and today – which ended up being fluffed by Walcott.

But do we know how to feed him? I’m afraid not.

Finally, Ramsey had a great match. His movement was good and maybe he is getting back to his pre injury form. He is still young so he should be eased in with care. Depending on him fully last season wore him out.

In the end the draw was a fair result. Could Arsenal have won it? Yes. Could City have won it? Yes, as well. If everyone took their chances it probably would have ended up 2-4 in Arsenal’s favour but football is not about ‘what ifs’.

Football is about what you do when you have the chance. Arsenal will do well to remember that. Chelsea is next and we need to be more clinical if we want the three points. I will take this as a point gained rather than two lost. Chelsea’s a different case. We are playing at home. We have to make it count.