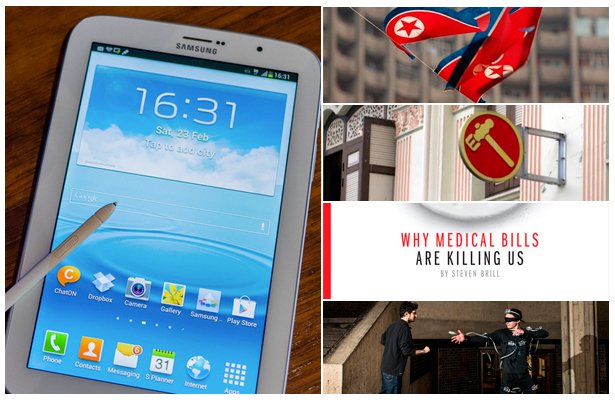 Be prepared to be flooded with mobile tech news this week as the Mobile World Congress kicks off. First on the plate are the Samsung Galaxy Note 8.0 and HP Slate 7. You would have thought the internet would never come to North Korea under its current government but surprise, it has – well only if you are a foreigner. The population paper was published to public outcry and later passed without much fuss in parliament. Now, the Worker’s Party want you to know what they would have done if they were in power. A first world country should have a first class health system? Times reports that that is not so in the United States as multiple sectors across the American population are slowly getting drained by an increasingly complex healthcare system. Finally, you can be Spiderman and it involves more than cosplay or hammering on your gaming controller. A suit has been made with ultrasonic senors so you will know when someone sneaks up on you. Handy.

Mobile World Congress 2013 is well and truly on and the first of many new mobile device announcements were made today. Meet the Galaxy Note 8.0 and HP’s Slate 7. Both Android tablets are targeting the Nexus 7 and iPad Mini markets. Expect more tablets and phones in the coming days. [Both via The Verge]

Pyongyang has sanctioned internet access to mobile connections within North Korea but don’t get over excited. This will be open only to foreigners residing in North Korea. Whether Eric Schmidt’s earlier visit to North Korea had anything to do with it is a big unknown. [via Engadget]

We often accuse opposition parties of making huge dins but being unable to produce good alternative solutions. Well, that changes today. The Workers Party has launched its own Population Policy paper in response to the initial paper that was passed by the ruling People’s Action Party. Do yourself a favor and be fair to both ends. Read both papers. [via Yahoo! News]

Death by a thousand cuts has taken a new meaning. Time’s report on the high cost of medical expenses in the United States is an eye opener on how a first world country is coping with one of the bare essentials of life – access to medical aid. Medical practitioners say that the system is getting too complex and that patients are paying the price. Healthcare provision is a nightmare in policy planning and this is a good editorial if you want a secondary perspective. [via Time]

Some books turn reality like how Twenty Thousand Leagues Under the Sea was the inspiration that led to the creation of submarines. Now, Spiderman can rightfully join the club as University of Illinois’ Victor Mateevitsi has built a suit that can detect danger via senors that receive ultrasonic signals. Best of all you can literally don up and be Spiderman. Play acting was so yesterday. [via Engadget]