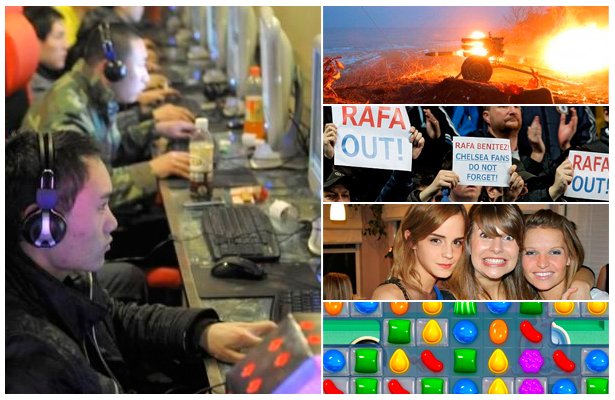 Conflicts abound in this relook at how mainstream media in the United States is covering hacking attempts from China. Also, another opinion on North Korea after it dramatically scaled up its military operations with the United States in its sights. Is this just a dramatic show of force? Benitez is sick of having nearly everyone laugh at him and that includes the Chelsea faithful. No surprises that he puts the blame on a teenage blogger in Czech Republic. Seriously, Rafa. Photoshopping isn’t complete until you have celebrities in your party, here are some ideas. Lastly, Candy Crush has taken the world (and many of my friends) by storm and its CEO is building on that top-of-the-world feeling.

Countries have been trading accusations that they are being hacked by each other. Enter the United States, China, South Korea and North Korea. The list seems to grow but it is worth taking a relook at this issue. Graham Webster highlights certain biases in the Washington Post’s coverage of the issue and how sometimes journalists get too far ahead of themselves.  [via Aljazeera]

Tensions are escalating along the Korean peninsula as a show of force by United States and South Korea builds on North Korean rhetoric. Most believe that North Korea does not stand a chance if this escalates into a full scale war. Korean lives on both borders will be the likely the greatest cost but it is difficult to see Pyongyang surviving a U.S. assault. Furthermore, North Korea seems to be releasing all its battle plans and photos of them to the media. Is this just another chapter in a play for power? [via BBC]

Blogging and social media seem to be having an impact on football. Last season, a Liverpool blogger documented how he was threatened as the club believed he was putting transfer deals in jeopardy. Now, Benitez swings out claiming that a teenage blogger from Czech Republic is the cause for all the hate he is getting. Maybe Rafa should dig deeper before blaming kids with keyboards. [via ESPNFC]

#4: Photoshopping Celebrities into Your Party

Photoshop is a new standard. You can’t really believe what you see nowadays because everything that can be photoshopped has been photoshopped in one way or another. I won’t call the following pictures professionally done as the ‘artist’ did not bother smoothening skin tone differences from neck to body. However, the photos are believable on first glance. Here’s how you can have great memories of celebrities at your party. [via Twisted Sifter]

It’s been months now and many friends and family of mine are hooked on Candy Crush. I am not touching that with a ten foot pole but the game has soared to such heights that its creator, Riccardo Zacconi, is looking ahead at what he believes will be a new gaming empire. He claims to be independent of the Facebook platform. One would suggest that he remembers Zynga’s bittersweet experience before crowning himself king. [via CNet]